We have moved to new digs!

A bit more rural, a lot more isolated but definitely more suited to my plans. 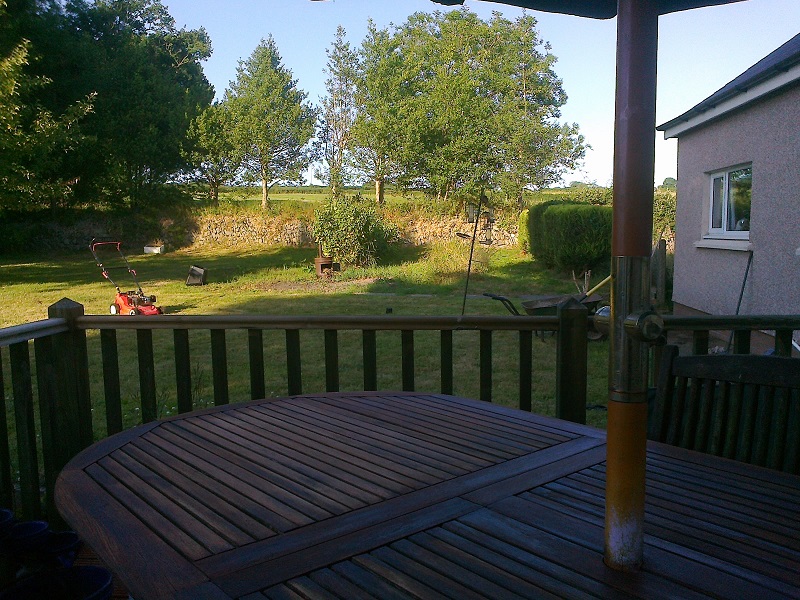 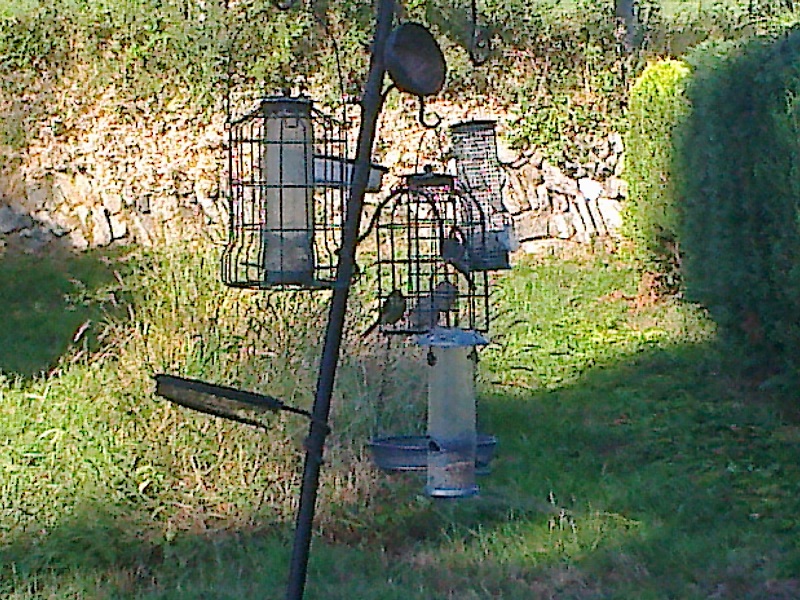 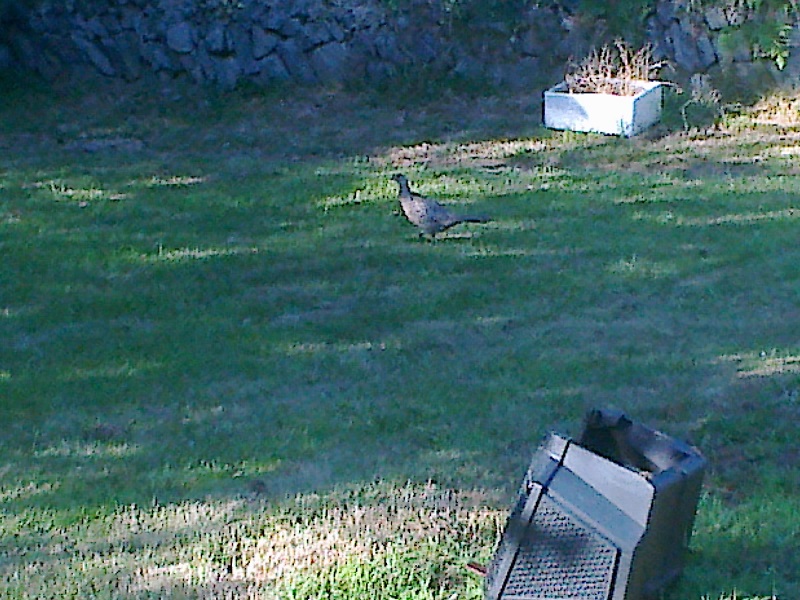 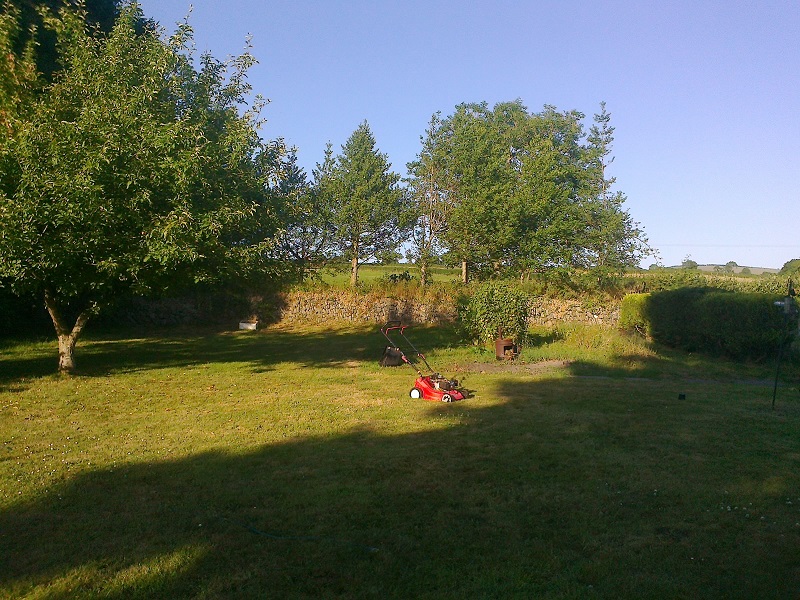 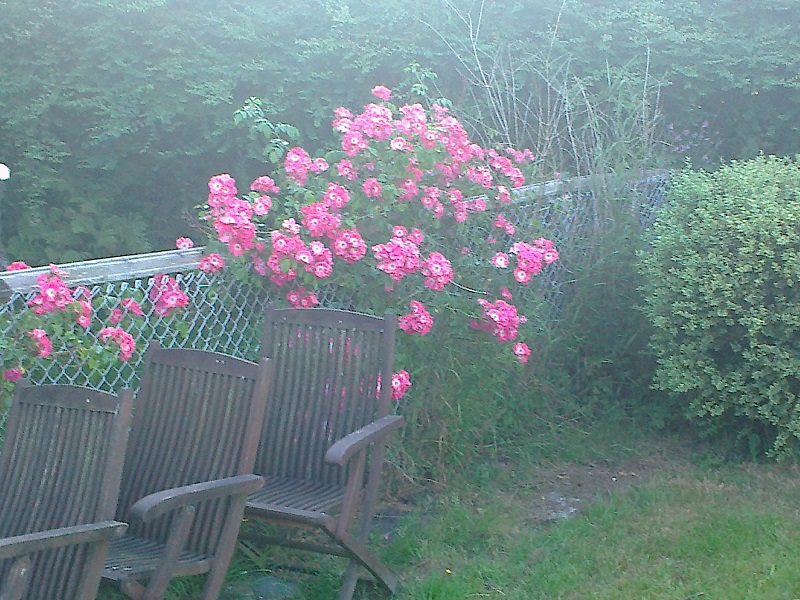 Well, it's got to be a year since I fitted the rainwater harvesting system so time to give the slow sand filter an inspection and overhaul.

I removed the filter from the facilities and took it outside for a tentative stripdown and 'recondition' and was pleasantly surprised to find very little needed doing. To be fair, I haven't used vast quantities of water...the occasional brew and handwash, but the filter was in extremely good condition.

The PU foam just needed a rinse out and the sand column looks in perfect order. The only major cleaning needed was to the bag prefilter (the foot off a pair of 80 denier stockings) which had trapped a fair bit of debris (mostly dust, pollen and bird-shit). Thoroughly rinsed out under the hot tap (yes, the sun is shining and I have lashings of hot water in the calorifier), and good to reassemble and refit the filter.

I'm rather pleased with performance. I may need to fit a new Pozanni filter cartridge on the drinking water side of things, but thus far the water is still of potable quality. Based of course only on smell and taste...but I'm fairly sure a bacterial test will show the water as plenty good enough.

Today's temperatures are being logged, the batteries are holding up nicely at around 13.1v and all systems are working as expected. My only niggle was lack of telephone thanks to rabbits chewing the CAT5 cable. How the internet stays up but they love chewing the 50v telephone cores is a mystery to me!

Cable duly spliced in a couple of places and now I have phone again.

I'm still a little wary of the lighting circuits. They were tripping out the RCD up at The Manor, but with it being very bright out today, the only light I am using is in the loo, and that is run from a fused spur off the power circuits. 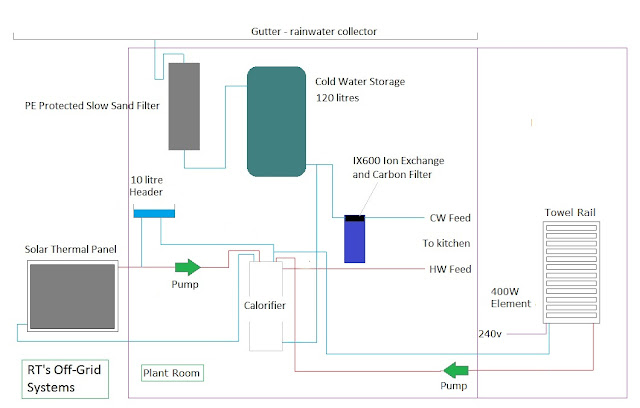 The gutter and solar collector are (obviously) external to the van body. The balance of the system is all contained in the 'Plant Room' or 'Toilet'. The towel rail is mounted in the kitchenette. CW and HW feed to the kitchenette go to the two taps on the kitchen sink.

The power for the electrical control systems and pumps can be provided from solar PV via an inverter rated at 300W but the 400W element is a bit too meaty for this so can only really be powered from the electrical hook-up to the body. To be fair, on days when the electrical heating needs to be used, I'll be running from grid power anyway. When running as a solar only system, total consumption is 60W (for the low power impeller pump). With electrical heating on and no solar, the total consumption is 480W (400W for the element and 80W for the pump). If there is some solar input and I'm using electric as backup, then maximum loading is 560W, although the element will be cycling because of the thermostat and the solar pump will only be operating in cycles because of the temperature controller.

I'm guessing that if I monitored this over time on the kWh meter, the mean consumption will be about 500Wh, or about 6p an hour for heating and hot water.

So I've managed to get some more time in down at the box as the B&Q gig is now finally over. 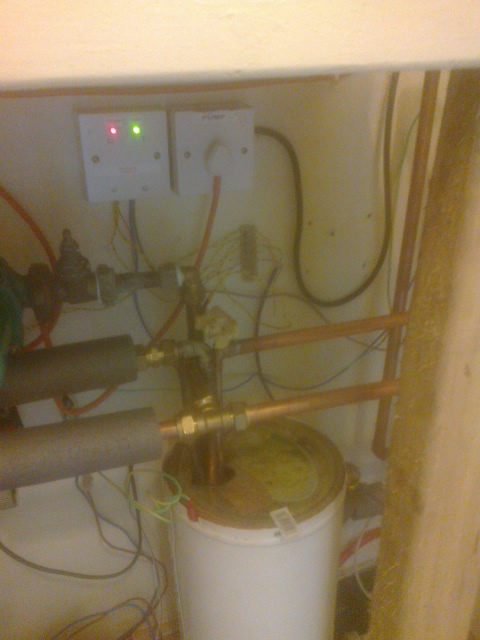 You can see here, the second coil (primary) has now been connected up and the lower insulated pipe coming in from the left of the photo is the feed and expansion pipe from the header tank. 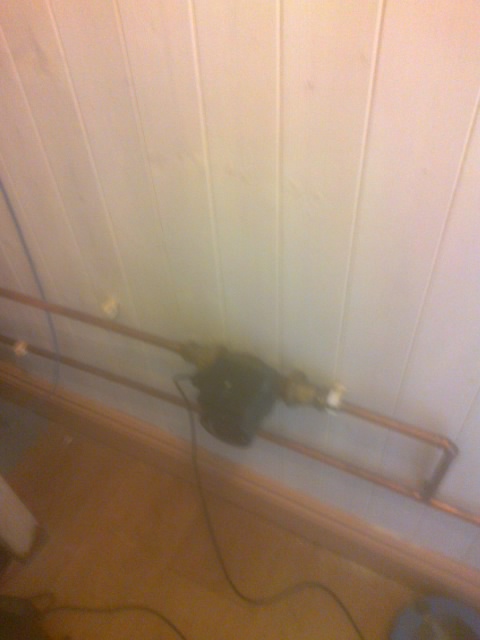 Shown here is the second Grundfoss pump installed in the towel rail circuit. With the towel rail immersion element doing it's thing, hot water can now be circulated through the spare primary loop in the calorifier and thus transfer heat to the secondary. With no solar input from the collector panel, I can still generate a few litres of warm water for washing up or handwash. 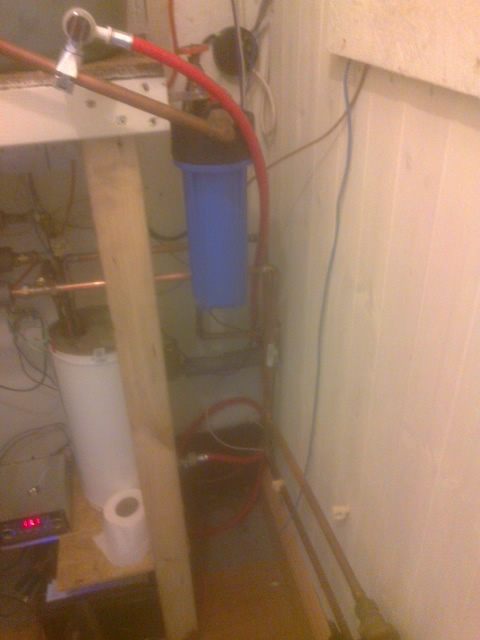 I just need to get in among all the gubbins now and tidy up all the cables, clip the pipes into place and finish everything off. I still need to fit a frost stat so the system only kicks in when the temperature gets too low for comfort and a digital timer so I can 'program' the heating system.

I shall update my diagrams and post when I get a chance, but in essence I now have a dual-sourced central heating system. Solar input for the warm sunny days which is just used for water heating in summer (where, in theory, I won't want any space heating) and electrical input for the winter which also acts as background space heating in the kitchenette during the colder months. In between times, I can use a combination of both, so I should be sorted now for all states of the weather.

I've not been in much. Long hours at the store as we are closing down and it has been all hands to the pumps.

Despite not getting much shed time in, I have been plotting and planning and amassing supplies for the next experiment.

Hydronic heating. This is the description of any heating system where the heat transfer medium is pumped water. A radiator is an example of a hydronic heater. Hot water is pumped through the rad, which gets hot and thus radiates heat. The water, now cooler because of thermal energy transfer, is returned to the boiler, heated up again and recirculated.

So I got to thinking. If the sun is out, then the solar panel heats my washing up water. If there isn't any sun, there isn't any hot water. So, I could use an immersion heater, only the 'hole' for the immersion heater element has been used for the microbore heat exchanger. Scratch that notion, unless I can find a way of injecting some heat elsewhere.

At the shop, we sell heated towel rails. Designed to plumb into the central heating just like a radiator, except they can have an element fitted to run them off electricity. Either way, they rely on the towel rail being filled with water for both heat transfer and for thermal mass. Which got me thinking. If I use the electric element to heat the water in the towel rail, perhaps I can pump it out, pump some more cold water in and then use it as both a water heater and a space heater.

Just by chance, I have a 'spare' microbore loop in my calorifier, so the plan is to use another circulator pump to circulate the water between the towel rail and the calorifier. In cold weather, or on very overcast days when there isn't any solar to be had, I can not only take the chill off the inside of the box, but possibly generate hot (or at least warm) washing up water. 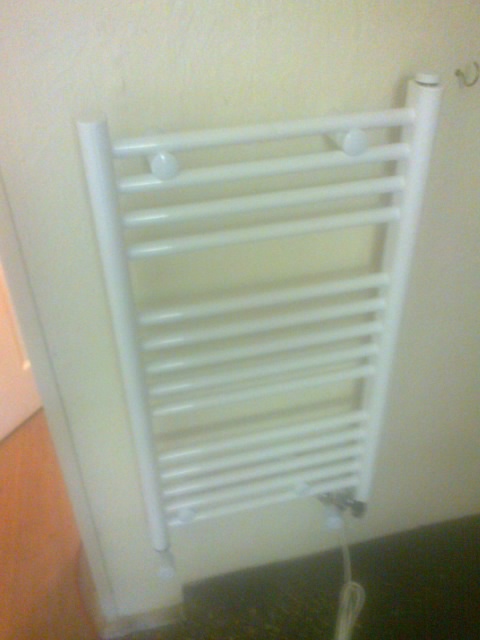 The towel rail, with heater element fitted and hydronic connections. This is located in the kitchenette area, so if it only functions as a towel rail after all, I can at least dry my teatowels! 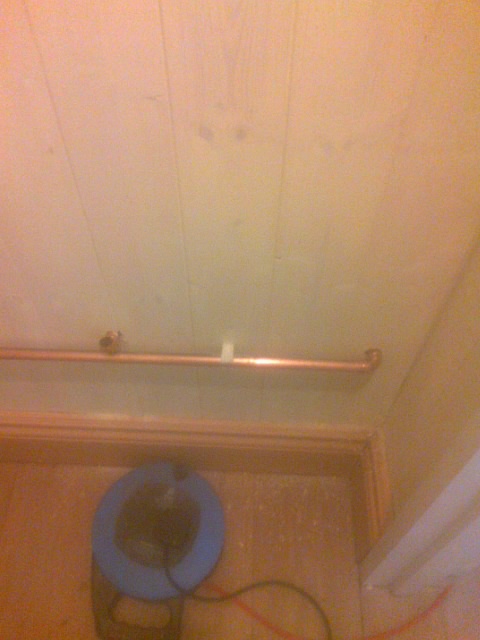 The pipework goes through the stud wall and into the 'facilities'. This might get an insulated jacket to minimise losses, or it might end up radiating some very low level heat into the loo. We'll see what happens once I commission the system. 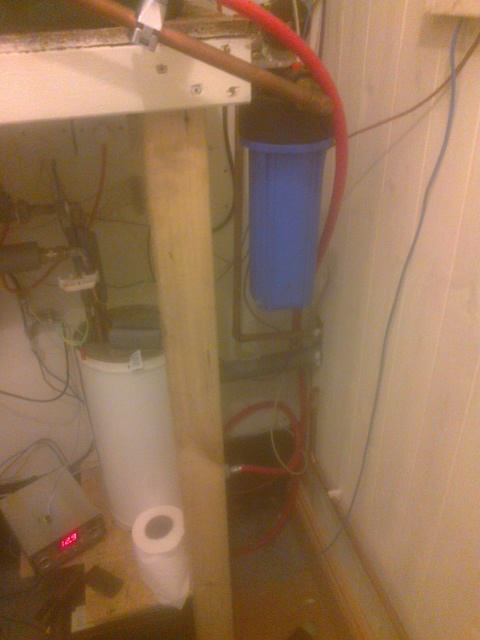 I need some more pipe and a couple of 15mm to 10mm adapters to link into the second calorifier coil, and I also have to shoehorn in another Grundfoss circulator pump. One happened to avail itself thanks to me stripping the old oil boiler a couple of years ago. It was lurking in the chicken shed. I've just finished cleaning it up, wiring in a power cable and bench testing it. All looking good.

I may have to think about a feed and expansion system, but it might just work as a partially sealed system.

After building myself a fairly substantial bookcase (ok, not particularly deep but 30" wide and taller than me!) I still had a fair stash of decent plank left.

Hobbit is still hankering after a dog, and we recently had an 'inspection visit' from a dog rescue place. We got the seal of approval subject to possibly putting another layer on the side fence in the garden.

"That's great," she tells the inspector, "as His faRTiness has some wood sculling about..."

An hour of sawing, drilling and screwing and we now have an additional foot on the garden fence. 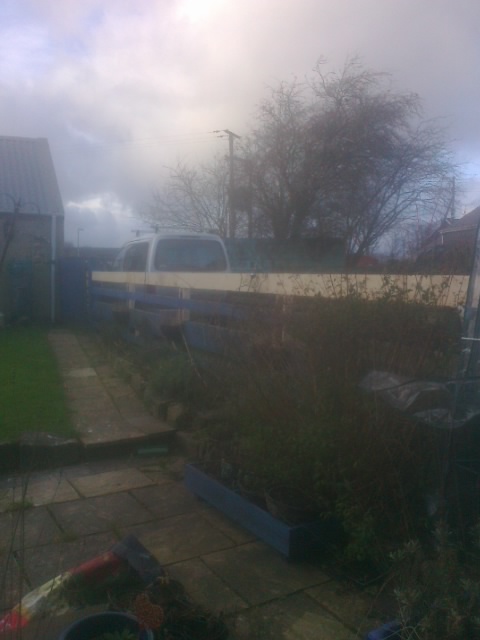 Enough long 6" stuff to make a new top rail, and a couple of the 3" pieces were pressed into service as verticals to extend the existing posts which were a little short. 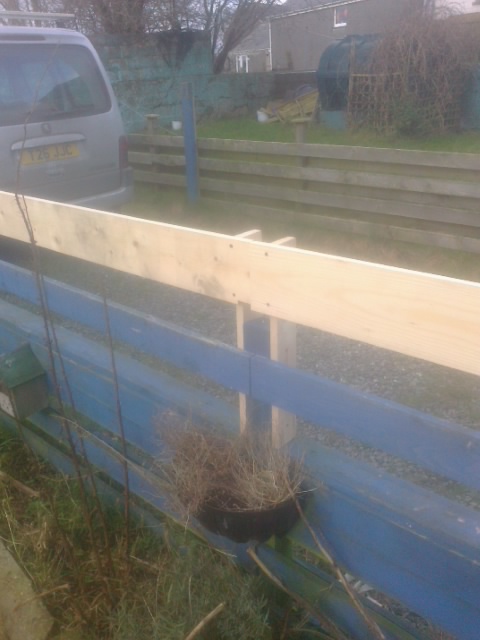 I had a large bag of drywall screws salvaged from the floor of the firing range in Portishead, so the materials and construction just cost me an hour of my time. 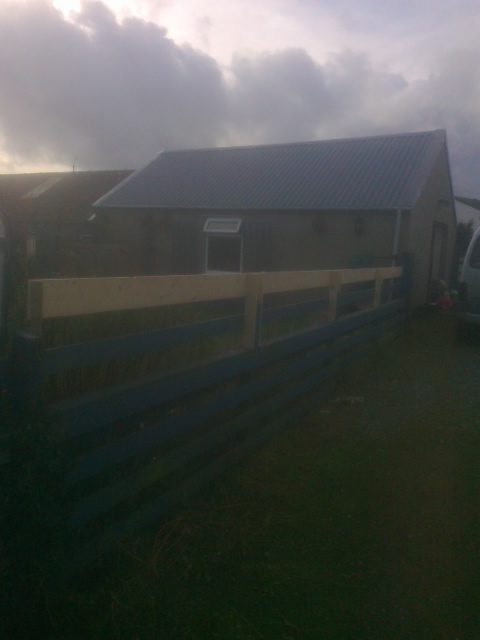 A shame that the cloud came over a bit dark, but you get the general idea. A quick run down to Lampeter in search of Cuprinol Shades 'Barleywood' proved unrewarding. I did pick up a tin of what I thought was the right colour (Forget-Me-Not) in B&Q a while ago but turns out I had the wrong one. DL Williams in Lampeter usually stock it in the 1 litre can, but they didn't have any. B&Q don't do that colour in store, but another chap in Lampeter managed to get me a tin on order and it should be in on Tuesday. More photos to follow once I've got it painted.

RT
48 year old LEGO fanatic who has decided to give up the hurly-burly of life in the fast lane, and relocate to a more green and pastoral existence in remote West Wales.